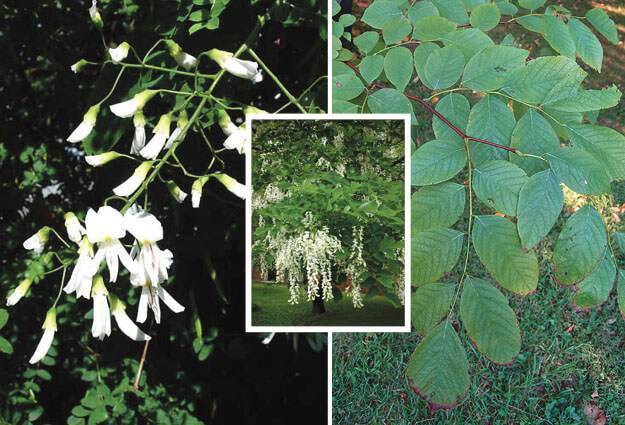 The Society of Municipal Arborists (SMA) announced the 2015 Urban Tree of the Year to be the Yellowwood (Cladrastis kentuckea). Sometimes referred to as the Kentucky Yellowwood or American Yellowwood, it is one of the rarest trees in eastern North America. You will find it in a restricted range from western North Carolina to eastern Oklahoma, and between southern Missouri and Indiana to central Alabama.

In the legume family, the Yellowwood is a medium sized deciduous tree, meaning it loses its leaves annually. It is characterized by smooth gray or light brown bark with yellow to pale brown wood that is heavy, hard and strong. The leaves bud pale green but turn dark green above and pale beneath when full grown. In the fall, they turn a bright clear yellow. The tree flowers in June with white, papilionaceous, which are slightly fragrant flowers. The Yellowwood is a low-maintenance, small shade tree perfect for patios and terraces.

Thinking of add this tree to your landscape? Think again! The chance of this tree surviving the harsh winter conditions we enjoy in Des Moines is slim! We might not get to appreciate the Yellowwood in our climate zone, but the Urban Tree of the Year shines light on the importance of bringing trees into our urban spaces.

The Tree of the Year program began in 1996. Each year, SMA urban forestry professionals from across the world select the urban tree of the year. The selected tree must meet certain criteria, including having strong ornamental traits. It’s often a species or cultivar considered underutilized by urban foresters.