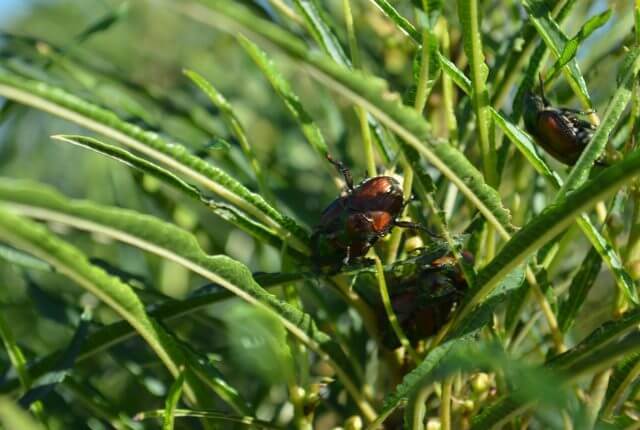 Summer is always the time for bugs and pests, and unfortunately, the Japanese beetles have made their appearance once again. Our team is spotting these insects around the metro lately, already feasting on their prime victims: linden, river birches, crabapples and black alder trees as well as roses, among some other trees and shrubs.

What is the Japanese beetle?

Japanese beetles are a small, metallic green insect. They feed on the leaf tissue, foliage, fruit and flowers of over 300 varieties of plants and trees. While the Japanese beetle won’t kill your trees and plants, it will defoliate them, making them appear dead. The Japanese beetles begin by eating the tissue between the veins of leaves and continue until the plant is consumed, leaving only the skeleton. This, in turn, causes the tree or plant to become weak because it is unable to feed itself through photosynthesis.

Though only a quarter of an inch long, these small insects can do major damage. Just a dozen beetles can devour a plant in a short amount of time. Japanese beetles also pose a risk to your lawn, as their larvae (white grubs) feed on and destroy the roots of plants, especially turf grass.

When are Japanese beetles most active?

These pests are a seasonal problem: adult beetles typically appear in mid-June through July, feeding during a few weeks of the summer. In late August, the beetles will mate and lay eggs, which will emerge the next summer to attack again.

What is the best treatment?

Although Japanese beetles are difficult to eradicate, insecticides offer a good protective measure. We anticipate a bad year for Japanese beetles because of the mild winter we experienced. As expected, the beetle emerged mid-June and now we’re seeing them more and more.

Or, if you choose to go the do-it-yourself route, it is important to know the target and surrounding plants, as well as understand that all insecticides can kill bees if used at the wrong time. If you want some guidance, our staff is trained in proper treatment and can perform soil injections to stop these insects before they destroy your lawn, plants and trees. The injection heads straight to the vascular system of the plant or tree and serves as a protectant from the beetles.

Give us a call at 515.987.0800 or request a quote online. Remember – always have your trees examined and worked on by an ISA Certified Arborist, as they are specifically trained in tree care.